Back in the mix

Hello blog hiatus! Can you tell I rejoined the work force in January? Hence the radio silence since then! It's been a crazy 9 months...let's recap:

Took job at Health & Wellness Center in January...Colt goes to Mackenzie's for daycare...Bryce goes TDY to Sardinia for 2 weeks...I become involved with a breastfeeding support group at work...in March Colt gets a spot at the CDC (yay!)...4 days later Bryce deploys in support of the Libya conflict (on my birthday no less)...I struggle with the shock of an emergency deployment and suddenly single-mommyhood...Bryce comes home...we get family pictures done...Colt starts pulling up and cruising...I love working with the breastfeeding group and decide to bid on a government contract for a Lactation Consultant...Bryce deploys to Korea...I once again struggle with being a single, working mom...Colt excels at table food...I win the bid and start a new job at the hospital creating their breastfeeding program...and that brings us to now!

Bryce will be home in the near future and I cannot wait to have our family back together. Colt turns one year on Wednesday...for reals?? How is that so? I celebrated 5 years of sobriety last Saturday, and Bryce and I will have 4 years of marriage in the bank on Friday. Now that I've dipped my toes back in the blogging pool with this post, I hope to continue. For now though, it's off to bed.
Posted by Sara at 15:35 No comments:

Figures my first post of the new year would be about a giveaway! But this mat was too enticing to pass up. :)

Houghton Happenings is giving away an Oshi Mat - a PVC- and latex-free mat for babies and toddlers to play on. Read more about it here.
Posted by Sara at 02:57 1 comment:

The only good thing that came out of Day 1 is that Little Guy slept fine that night. He got up twice to eat (no big deal) and promptly went back to sleep after each time, until starting his day at 7:20. I know The Book said don't let a baby sleep past 7am, but after his stressful day I figured he needed his rest (plus, what's 20 minutes anyway?).

So, Day 2. Everything is fine until I lay him down for Nap #1. Total scream-fest for the entire hour - again, no sleep. Afterward, husband and I decide to make a slight adjustment. I think I was going for too much change all at once - from the swing or our arms to the Pack & Play, unswaddled (he is swaddled at night still, for the time being, and isn't used to sleeping on his back unswaddled). For his next nap, we put him in the swing and let it soothe him to sleep. The Book says this is fine, as long as the swing is turned off after he falls asleep. I do just that and he sleeps for a little over an hour, after which he wakes up happy and smiling. Oh, sweet relief. I think I'll stick with the swing for as long as I can, which at the rate he's growing really won't be much longer!

Later, he takes a nap...in Dad's arms on the couch. According to The Book, this would be a Total Fail. But, both he was able to sleep for over an hour, which was good. The Book says sleeping in arms doesn't give babies the good restorative rest they need. I don't want Little Guy to get into the habit of sleeping in Dad's arms - it would mean hell for me when he goes TDY or deploys. But they both love it, so I guess I'll have to wean them both off it slowly.

I was really nervous to put him to bed tonight, as he screamed for 1.5 hours last night before falling asleep. Plus, I'm on my own tonight as Bryce is at work - would I have the resolve on my own to withstand that much crying??? Luckily, Little Guy cried/whimpered for only 33 minutes. And it wasn't anywhere near the intensity it reached last night. It was definitely more of the "Hey this sucks" crying as opposed to "OH MY GOD I HATE THIS COME GET ME RIGHT NOW" crying. It wasn't easy, but we did it. :)

I have another sleep book on the way - The Sleepeasy Solution by Jennifer Waldburger and Jill Spivack. I read 2 chapters online (thanks, Google Books) and I like what I read. I'm not ditching The Book - it just never hurts to have more resources!!
Posted by Sara at 13:05 No comments:

The time has come for Little Guy to learn how to sleep. Never thought you had to teach a baby to sleep...there's so much crap you don't know about parenting until you're in the thick of it!

We're using the book Healthy Sleep Habits, Happy Children to help Colt learn how to sleep during the day. It involves adhering to a schedule of naps that flows with his natural sleepiness. His night sleep has been regular and predictable for quite some time, but he's never been much for day sleeping.

I thought Day 1 was going to be great at first. We woke at 6:45, and after a change and a nursing session, he slept from 7:20 - 8:30 in his swing (even put himself back to sleep a couple times even though I turned the swing off). Wow! Then we played for awhile. At about 10:00, I put him in his swing (since The Book advises no longer than 2 hours of wakefulness between naps). He cooed to himself in the mobile mirror for about 20 minutes, let out one or two small whimpers and fell asleep. What?? He only slept for about 40 minutes before he woke up crying, which usually indicates he hasn't had enough sleep. And it was downhill from there.

When we went for the afternoon nap around 12:45, he fell asleep nursing and slept for about 15 minutes in his Pack & Play, and then woke up screaming. The Book advises letting the baby cry for no longer than an hour at nap time, so we let him cry, hoping he'd fall back asleep. Yeah, right - he cried the entire hour. Longest hour of my life. The attempt at a late afternoon nap was even worse - he fell asleep nursing, but as soon as I laid him in the P&P, he woke up screaming. This time I didn't let him cry as long - The Book says a late afternoon nap might not happen and I couldn't take another hour of screaming.

Our next sleep time: bedtime. The Book advises putting babies to sleep between 6 and 8. No problem - he usually goes down around 7ish, give or take. However, he was so exhausted from today's endeavors that when I nursed him at 6:00, he was out...or so we thought. I swaddled him and laid him in his crib, just like we do every night. 20 minutes later, he was screaming. Now, this is pretty normal. It sometimes takes us one or two tries to get him to sleep. We never thought much of it. But our new method also has a prescription for night sleep: Let the baby cry it out AS LONG AS IT TAKES. Whew. For our little guy, it took an hour and a half before he fell asleep. My living room is spotless, because I couldn't just sit there and listen to his cries. It absolutely broke my heart and almost broke my resolve. Thank God Bryce is here for support.

So, we'll see how he does overnight after our first attempt at day sleep. If we're consistent, The Book claims young babies can catch on very quickly. I hope it's true.
Posted by Sara at 12:51 No comments:

First visit with Santa (and don't forget to vote for Colt!)

We took Colt to visit Santa (or Father Christmas, as he's known over here!) last weekend. He's too young to really care either way, so this was mostly for Mommy. :) 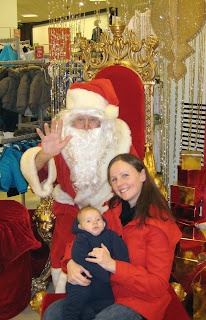 In the UK, Santas aren't allowed to actually hold the kids. There was a little bench in front of him that kids could sit on, but that didn't really work for our little guy...hence the reason Mom is in the shot! Colt is also wearing the adorable bear suit Gram got him from Old Navy. It was super cold in Bury that day, but his little bear suit kept him nice and toasty.

I recently heard this song by Taylor Swift - Never Grow Up - can relate to it as a mom and as a daughter. :)

I entered Colt in the American Baby Cover Contest over at parents.com, and he's in the running to become one of the weekly Reader's Choice Finalists!!! This is the photo they selected:

Adorable, right? If you agree, help us win! Head over to http://photos.parents.com/category/vote/photo/640260?esrc=nwphotofaves7 and vote!

Also, if you have a blog, Facebook, Twitter, etc., please share this link and ask folks to vote for him! The more the word gets out, the better our chances!! Thank you!
Posted by Sara at 08:26 No comments:

My favorite part of the day with my baby boy has to be in the morning when he wakes up. No matter whether it's 0530 or 0800, or whether I'm cursing the early hour or wide awake, I'm instantly happy when I reach his crib. He always wakes up with a smile on his face. Our routine is pretty much the same every morning (well, except for today, funny enough):

He never makes that much noise when he wakes up, so I'm never quite sure how it wakes me up. I'm a light sleeper, but not that light (plus we have white noise playing in the room). I guess it's just I sense a change in the room or something - I'll call it my Momstinct. :) Anyway, I get up and go over to his crib. He's either squirming around or just lying there looking at his woodland animal mobile. Sometimes he makes little happy noises, especially if he's looking at the mobile. Often the swaddle is around his waist and his little arms are raised over his head in his Victory pose (like, hooray, I defeated sleep again!).

I let him see me and then put my hand on his little tummy (don't want to startle the little guy too early!). As soon as he sees me, he gets the biggest grin on his face. And that's what I look forward to every morning. It's a truly beautiful sight, where his whole face lights up and his little body wiggles - he really smiles from head to toe! I say good morning and ask if he's ready to start his day, to which he responds with more wiggles and smiles. I usually give him 1 or 20 kisses on the cheeks while unwrapping the swaddle, then it's off to the changing table. He gets in a good stretch (Stiff Baby!) while I get ready to change his diaper, then it's downstairs for a meal then playtime or playtime then a meal, depending on what he wants.

I really treasure these mornings with him. Even though we spend all day together, there's something special about these moments when it's still dark out and everything feels mellow. Today was different only because he didn't wake for a nighttime feeding until 5:30am, and then didn't want to go back to bed afterward! Though my day started a bit earlier than I would have liked, the upside is that my baby boy slept through the night for the first time!

Since the above picture is from quite awhile ago (don't have any newer pics of him being stiff or victorious), here are some recent photos of my 3 month fella (who now weighs 15.5lb and is 26in long!):